You might have heard of wave power or wave energy systems. These are renewable energy systems that generate energy (electricity, to be precise) from waves.

While wave energy is nowhere near as popular as solar or wind energy, numerous studies have concluded that wave power could contribute significant amounts to world’s energy needs. But the industry itself has made halting progress.

Why is it so? Well, the answer to this question requires a story to be told. Here we go.

Let’s start from the very beginning.

What are the advantages of wave energy?

Firstly, how are waves formed?

Waves are formed due to winds – yes, wave energy is simply wind energy that has been transferred to water! So, you can consider wave energy to be derived from wind energy.

Even though they are formed due to winds, waves could score over wind in some aspects of energy. Specifically, waves carry a much higher energy per unit volume than do winds, so you can imagine how much more effective wave power generators can be per unit area, compared to wind power generators. This is fairly intuitive. Imagine a volume of wind gushing at your face, and now imagine an equal volume of water gushing at your face at the same speed – you will surely feel that the energy from water is far higher than that from the wind?

For the mathematically, minded, wave energy density could be 4-6 times that of wind energy, and about 25 times that of solar energy. This means that, per unit area (or volume, if you will), waves pack a heck of a lot more energy than do solar or wind!

Wave energy also has other advantages:

How do wave energy systems work?

OK, so wave energy systems have some real advantages. Now, how do these systems work?

But while that comparison is OK conceptually, when it comes to practice, wave power systems look and work quite differently.

The principle itself is quite simple. Waves, which in themselves are generated by winds drive an electric generator and gives us the electricity. It is conceptually similar to what happens in a wind mill, where winds turn the blades, which in turn turns the coil in the generator to generate electricity.

Here’s a picture of a wave power generator system, something that looks very different from what you would have imagined. This is the Pelamis Wave Energy Converter, one of the more well known names in the industry. 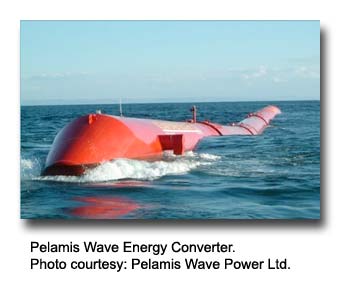 This video should give you an idea of how the Pelamis Wave Energy generator actually generates electricity:

While conceptually, wave energy systems are not very different from wind turbines, they are quite different when it comes to specific operational aspects. Part of that difference could be seen in the picture and video provided above.

From a technical point of view as well, operating in the ocean is far more difficult than on land; building offshore installations, for example, tends to be significantly more expensive than constructing wind farms or solar farms onshore. Saltwater is a hostile environment for devices, and the waves themselves offer a challenge for energy harvesting as they not only roll past a device but also bob up and down or converge from all sides in confused seas.

The optimal design for the environments in which wave energy systems operate has proved to be a challenge so far, which has led to a host of designs, including writhing snake-like attenuators, bobbing buoys, even devices mounted on the ocean floor that work by exploiting differences in pressure as a wave passes by. Some devices generate the electricity on the spot and transmit it via undersea cables to shore, while others pass the mechanical energy of the wave along to land before turning it into electrical energy.

Which of these drastically divergent concepts might emerge as a winner is far from clear.

So, while wave energy has some real strengths, and actually could score a point or two over the more dominant renewable energy sources such as solar and wind energy, technology challenges have been one reason why its potential has not been realized in a significant way so far.

Another critical roadblock in the way of wave energy commercialization is financing for research, pilots and commercialization. So far, the wave energy domain is filled with small companies working with small amounts of government funding. It will likely require the participation of some large companies, such as GE or Siemens (both major manufacturers of wind turbines) before wave power really gets rolling, according to numerous experts. Those companies may be waiting for the technology to sort itself out before investing, a common dilemma in any nascent field.

What needs to be done to accelerate commercialization of wave energy?

A recurring theme among wave power experts is that wave energy is where wind energy was three decades ago. At that time, engineers had not settled on the optimal design for wind turbines, but decades of ensuing research have resulted in highly sophisticated turbine designs and also had brought about economies of scale and learning.

A few years back, I co-authored a report on tidal and wave energy systems. What I realised during the research was how little real capacity has been built for wave energy systems worldwide, compared to the hype and expectations that this sector had raised. While in theory significant potential exists for wave power systems, as of 2016, I am still waiting to see the big boys mentioned earlier get into the game and try to get a large scale wave energy conversion system operating anywhere in the world.